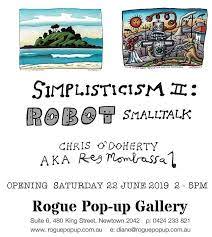 This exhibition is the global relaunch of a new art movement, religion and political party called Simplisticism.  I am the leader of this movement and to date the sole member.

People who join will be called simplistics, or for short, simpletons.  There is only one commandment: BE KIND – to each other, to the animals, and to the earth.  A useful piece of advice to members is to relax, take your foot off the accelerator and avoid conflict.

Over enthusiasm is bad for humans, it kills people by causing them to do violence to those who do not share their specific enthusiasm or who dare to criticize it.  These dangerous enthusiasms relate to religion, politics, race, nationality, sport, sexual orientation and tastes in music art and entertainment.

You would hope that human society is improving and progressing and while this is relatively true in terms of technology, medicine and living standards, advances in human decency and social justice are threatened by a sinister drift to right wing populism and authoritarian ‘strongman’ leaders in recent years.

This show consists of a continuation of my favoured forms and themes – landscapes, graphic works and absurd allegorical narratives.  There is also a suite of still lives-small quiet and relatively simplistic portraits of common fruits and vegetables.  The robot pictures are a new and current subject reflecting on the coming technological singularity which will occur when we achieve artificial general intelligence and a full nano-technological capability.  Nobody knows how this will play out, the robots may decide that humans are toxic pests and destroy us all.  And if they allow us to continue, will the robots be good priests, comedians and football players?  Will their vast and super-fast quantum intelligence achieve some sort of consciousness or some digital version of that mysterious entity known as the human soul?

My robots can also be analogues for humans in that they are either sad and confused, intoxicated, gormlessly happy or cruel and brutal.

Another confronting situation for human society is that even if the robots don’t destroy us they and their associated algorithms will eventually take the jobs of many or most humans and do them more efficiently and economically.  What then do we do to occupy and amuse ourselves?   This will require a transformation of consciousness away from the old paradigm of constant ruthless competition and the associated ridiculous worship of the alpha male warrior principle.  Can we think our way into a brighter future or will it require some genetic manipulation?

Please contact us to enquire about purchasing any of the works.