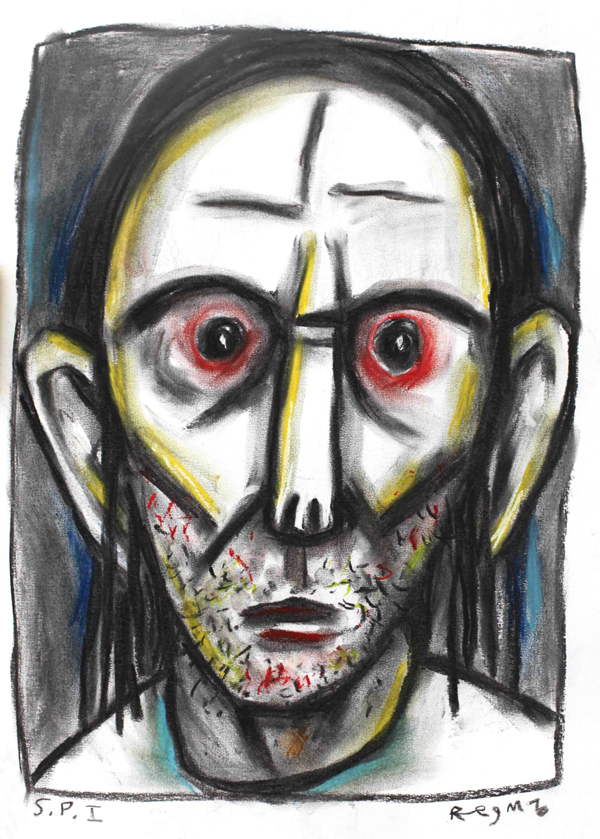 Born in New Zealand in 1951, immigrated to Australia with his family in 1969.

Returned to art school in 1975 and obtained diploma of painting in 1977.

In O’Doherty’s paintings we find anonymous fibro houses. They seem to represent the people who live in them: suburban and urban Mr and Mrs Australia. They are the backdrop to the stage on which O’Doherty’s inexhaustible ideas act themselves out.

The stage is often a landscape and a variety of things strut upon it : manifestations of Jesus, Holden cars, space monsters. Beneath the humour in his work lies the expression of serious insights and sympathies. The fibro houses have another level of meaning: his father built such houses. We can infer, then, that his father and the family and environment that enveloped his growing up have stolen their way into his work. That is another way of saying that O’Doherty is in the landscapes he draws or paints.

The Visible Art Foundation selected his works for an installation at Republic Tower, Collins St, Melbourne – in which his images were enlarged. Reg has designed T-shirts, posters, postcards etc for organisations such as Greenpeace, the Rock Eisteddfod, Circus Oz, the Opera House Trust, Redfern Legal Aid, the Wilderness Society, Westmead Children’s Hospital, The Powerhouse Museum amongst others.

As well as many important private collections worldwide, O’Doherty’s artwork is included in the National Gallery of Australia, the Art Gallery of New South Wales, The Powerhouse Museum Sydney, University of Sydney, UTS amongst others.

1999 invited by the city of Milan to speak at the La Triennale de Milano.

2000 Designed athletes shirts and inflatable characters for the closing ceremony of the Sydney Olympic Games.

2003 he had the honour of being invited to open the Colin McCahon retrospective “A Question of Faith” at the Art Gallery of New South Wales.

2007 a retrospective exhibition was held at the SH Ervin Gallery in Sydney and a full colour catalogue was produced.

2012 Reg Mombassa’s ibook Cranium Universe is now available for ipad. It contains new art, poems, song lyrics, film clips, philosophy, songs and drawing lessons. We think it is the first of its kind in the history of the universe.

2013 Reg is the creative ambassador for the celebrations for Sydney New Years Eve 2013.

2016 sees the publication of a new book : The Landscapes of Reg Mombassa – Antipodean Scenery: Views from the eyes of a car.